The Establishment of the Domain Tennis Centre

The Tasmanian Lawn Tennis Association had its headquarters at the Creek Road centre and was established in 1909. In 1957 the President, Mr Viv Holloway, and Board of the Southern Tasmanian Lawn Tennis Association recognised the need for a new International standard tennis centre for Tasmania. After considering three sites for the centre (Nutgrove, Queenborough and the Queen’s Domain), it was decided in 1960 to proceed on an area set aside by the Hobart City Council on the Queen’s Domain.Over the years the court surfaces at the centre have changed. The lawn courts gave way to Mateflex in 1979 (Hobart hosted the Australian Hardcourt Championships). In 1984 courts 11 to 18 were converted from clay to synthetic grass, the Mateflex was replaced by synthetic grass and seven grass courts on the lower side of the centre remained.

The Tasmanian International Women’s Open (now the Hobart International) was first held at the club in 1994. Five courts (centre, west, 8, 9 and 10) were converted to Rebound Ace and more recently Plexi-cushion the same as the Australian Open.

In 2005 the remaining grass courts were replaced by five synthetic clay courts known as Polyclay. These courts have become a favourite. Fully lit they allow year-round play (the grass court season lasts only for six months a year) with the maintenance issues being far less than the grass courts.

In 2005 the club received a State Government grant to upgrade the clubhouse facilities. This upgrade was completed in December 2006 with new facilities for administration, a tennis pro shop, coaches accommodation, as well as the addition of an expansive deck overlooking the clay courts with magnificent views of the Derwent River and over the city of Hobart.

In 2011 a 2,500 seat stadium was completed with VIP corporate box seating for 400 and public seating for over 2,000 people. New bar areas, media broadcast facilities, corporate kitchen, general storage and function rooms are housed within the grandstands. Domain Tennis Centre is host to the annual WTA Hobart International tennis tournament held every January just prior to the Australian Open. The stadium has been a great addition to an already fantastic centre. 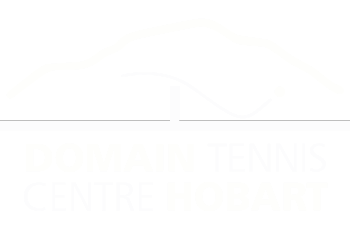